I think my goal for our first show was very tame. I didn’t care about ribbons or placings, or even about my performance. I didn’t care about getting disqualified or even falling off.  All I wanted was for Hemie and I (mostly Hemie) to have a positive experience.
Failed.
Don’t get me wrong, it was constructive, a “learning experience” – and most importantly it ended on a positive note. But overall it wasn’t a particularly fun or pleasant outing for either of us.
Phase 1 – Trailer, Tack Up, Warm Up
Hemie was a pro at trailering, stood quietly while tacking up, and longed and warmed up like he’d been doing this for years. Unfortunately they started the show before we could warm up in the jumper round. But most shows don’t allow you to warm up in the actual competition ring, so not a super big deal.
Phase 2 – Hunter Ring (wherein I eat dirt)
We had signed up for the 2’3″ jumper class, but the hunter ring was empty so we decided to head on over there. Hemie was a bit looky-loo, and we just circled around for him to take a nice good look at everything. Then we headed to our first jump. He dodged out. I halted him and corrected. Not a big deal – I had anticipated some refusals at the show. So we reapproached. Notice my legs and seat in this pic:

He tried to dodge, I corrected him, then became unbalanced and unseated. On the landing I made like a lawn-dart and crashed into the sand. To add injury to insult, Hemie kicked out at me and got my ankle nice and good.

“Good thing you’re wearing your vest!” someone yelled from the crowd. Gee, thanks.

But its true. I was the only one at that H/J show wearing a vest, and the only one who needed it, apparently!

I got back on, and we made it over a few more jumps. I almost fell off once more when he spooked, and he was clearly frazzled the whole time. But we did get over some jumps.

But before we could get over jump #4, Laurie called me out of the hunter ring.

Phase 3 – Jumper Ring (wherein Hemie has complete meltdown)
She thought that the jumper ring would be a better environment for Hemie. We schooled there previously, and there were some very “plain” looking verticals.

Well, I wasn’t feeling especially confident, not to mention I didn’t have time to memorize the course. So I asked Laurie if she would take him in the jumper class. Let’s just say Hemie was a handful.

In round 1, Hemie was clearly on edge and overwhelmed. His hips were swinging left and right – our straightness issues at home were 10x escalated at the show, and he got stuck a few times, refusing to go forward and instead just hopping up and down.
In round 2, Hemie just had a meltdown. He got completely stuck, so Laurie abandoned the idea of jumping and just focused on getting him to canter around the arena. When he was able to canter around okay, she called it quits and took him out.

She walked him around the property for about 20 minutes, until his brain seemed to reactivate and he quit spooking at everything. Then she walked him back into the arena, just to walk him around all the jumps in a relaxed way. He was back to his normal self.

Phase 4 – Back to the Warm Up (wherein the day ends better)
I asked Laurie if I could take Hemie into the warm up arena to go over a jump or two, mostly for my benefit but I also thought Hemie would appreciate it. After some hesitation, she agreed.

We spent a few minutes getting back into a groove together, and Hemie was clearly happy to be jumping and feeling like he was a good boy. We called it a day when we realized both of us were relaxed and feeling good. 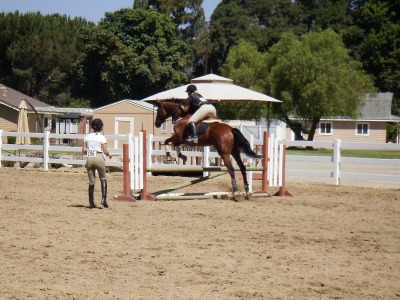 So, there you have it. I have a swolen ankle, a huge purple bruise under the left thigh (from hitting the pommel? who knows?), and I can’t turn my head to the left.  I’ve been icing everything a few times a day. A new helmet is on the to-do list.

My next lesson is tomorrow night. Hopefully I’ll be able to cram my ankle into a boot!