To follow up yesterday’s post, the 3rd miraculous moment in our lesson last weekend shows me that Bohemian is game for cross country.
Here is the water complex corner of our event arena: 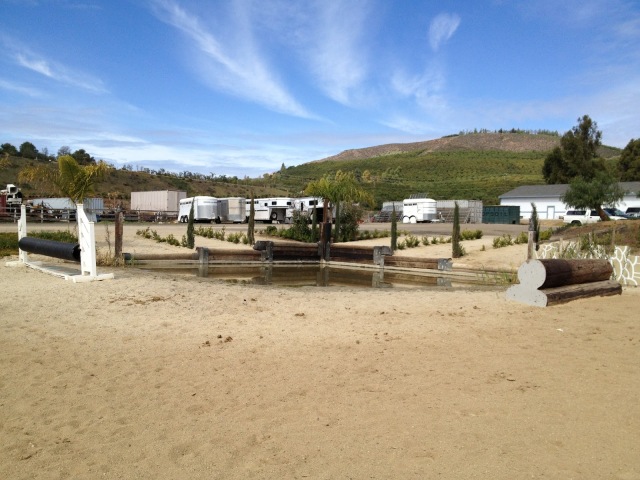 We handle water just fine and have done the shortest banks on both sides without issue several times.

So Laurie said we should do the middle bank on the left, down to the stacked logs. Yes, those novice sized logs on the right of the photo. It’s not that tall of a log, but for some reason I was still nervous about it. Its just so solid. and we haven’t jumped even a baby log in over 6 months! She saw the trepidation in my eyes, so Laurie says “Ok, come down the other middle bank and hop over that black tube jump instead.”

0.o  Uh, not much better is what I thought. I was nervous about it, but for some reason didn’t say anything. Its almost as high as the log and to a horse it looks pretty darn solid. I walked him by it so he could get an eyeful. The plan was to come down the middle bank (the first time doing that size of a bank, by the way), come to a walk, then trot out over the black tube jump. 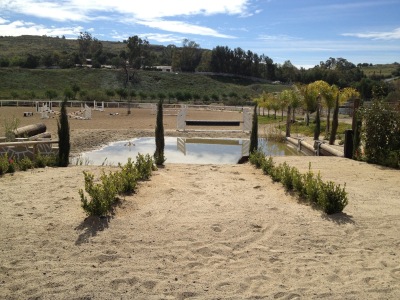 Well, down banks have been a challenge for me (dating back to Spirit days), but I was sure to stay back and have long arms and reins. Hemie just stepped down like a pro. He came to a walk right away, but I was slack in picking up my reins and getting our act together. Instead of a trot we were at a quasi-jig (a walk+, really) by the time we reached the tube jump, and you know what happened? He. jumped. it.

He must love to jump, because I thought for sure he was just going to come to a nice straight halt in front of the jump, and instead he put in a great physical effort to lift his body and jump this thing from a walk. I was so proud. He loves his job so much, and he understands his job, that he took me over this thing. We came around to do it again, and I would say I marginally improved my performance and we had a slow trot going on. I got left behind but that’s okay.
I am coming to see more and more what a great horse I have – and that its okay to start trusting him to do his job. I still need to be the best rider I can be for him, but I just really appreciate having him step up to the plate and help things go successfully even when I haven’t done my full share. Good boy, Hemie.