As of last night Hemie seemed to be doing better. If Wednesday night was a “1” then Thursday night he was a “0.5”.  He trotted around nice and evenly, without head-bobbing, but every so often I thought I saw a hint of a bad step. According to Laurie that is classic stone bruise or hoof sensitivity.
The poor guy has so much energy, he danced in the air and bucked and tried to canter off a few times. I got his mind off of things by walking him all around the soft arena, including into the water. He got to sample many tasty bushes, get up close and personal to the jumps, sniff at and walk through the water, and then shake his head and prance like a hot little TB.
Our farrier called me back last night after the longe, and said that hoof-testing would not be helpful. In his opinion it wouldn’t indicate if the issue is or is not with his hooves, since some horses are just more or less sensitive in their feet and we have no idea what Hemie’s “normal” sensitivity level is. He said we could try putting shoes back on, but I decided I’d rather just give him some time, since he is already showing improvement. He said Hemie could be just a little more sensitivity due to the gravel walkways at our barn and the lack of rain to soften the footing.
The plan is to check on him again tonight, and then again Saturday, and on Sunday is the show. If he is 100% then we’ll still go. Thanks to everyone for the warm vibes – they do help!
Meanwhile here is a photo dump:
This next series is from a random evening when The Birds were at the barn. Hemie was a very good sport – we tried our hand at bird chasing but ultimately the birds won! 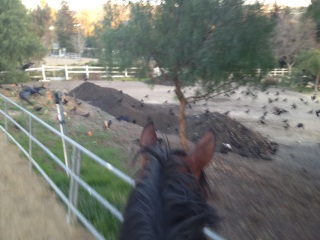 Sorry for the blurry photos – handling crazy horse while taking photos is not the best.