Good news: Hemie’s follow-up fecal test came back negative. So the dewormer worked and he is parasite free.
But as I mentioned when he tested positive a few weeks back, I’ve started him on diatomaceous earth as a feed supplement. He gets 1 cup of D.E. with his other feed, 4-6 days a week (when I see him). 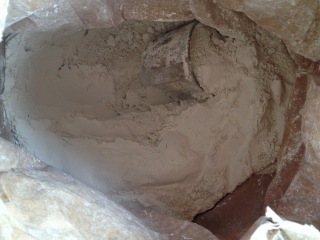 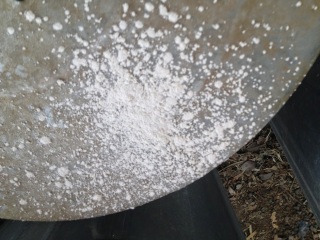 It is a very fine white powder. It gets everywhere. So it’s not my favorite supplement to deal with.
But a little bit of mess and the cost of the bag is worth it for me even for the chance that it could help Hemie. We wont know for another 3 months, which is when Hemie will get fecal tested again.
Karen of Not-So-Speedy Dressage graciously sent me an article from Equus about D.E. which underscored the overall gist the information I’ve been able to find on it: some people swear by D.E. and credit it with dramatic improvements in their horse’s health and ability to fight/prevent parasites. But the success is supported only by anecdotal evidence rather than medical/scientific studies, and most vets do not recommend D.E. as an anti-parasitic preventative treatment. They say it wont hurt your horse, but it probably wont help either.
Interestingly, I’ve been able to find more about human consumption of D.E. and in fact I’ve started taking it myself just to see. I took a few scoops out of Hemie’s feed bag and keep it at home. I’ve been taking 1 tablespoon per day in my morning breakfast smoothie.

The first day I took it, I had horrible stomach pains. Some people online think this is due to D.E. killing off parasites on your gut (eeek!). Because of this I kept watching for any colic or tummy issues in Hemie during the first week – luckily none presented. Meanwhile I haven’t noticed any other side effects.
It tastes like dirt though. Guess the name “earth” should have been a giveaway. Luckily Hemie doesn’t seem to mind.
For more information on D.E. here’s a good article from the National Pesticide Information Center, which is a cooperative of the US Environmental Protection Agency and Oregon State University.

4 comments on “More on Diatomaceous Earth”